Manitoba Transportation and Infrastructure’s Hydrologic Forecast Centre has reported that it is monitoring a series of precipitation systems that could bring up to a whopping 40 to 60 millimetres (mm) of rain to much of Manitoba over week or so. Local areas could get well over 60 mm.

It notes that it will update water level forecasts to determine impacts from the rain on areas that are already experiencing flooding.

Southern and central Manitoba will experience strong south winds later today (Saturday) and overnight with wind gusts of up to 80 kilometres per hour. This can cause water levels in flooded areas of the Red River Valley from Letellier to Rosenort to rise by up to six inches. Wave action could result and see temporary water flooding on roads.

Residents in these areas are recommended to monitor local conditions and take any necessary flood mitigation actions.

In the Red River Valley, the province remains at a high state of readiness as water levels continue to increase.

It is satted that peak water levels could be as high as what occurred in 2009 on the Red River at Emerson and with slightly lower water levels, between 2011 and 2009 spring flood levels, from Letellier to the Red River Floodway inlet. Water levels are expected to remain high for an extended duration in many areas in southern and central Manitoba.

The Manitoba Emergency Measures Organization (EMO) continues to work with all local authorities and emergency management partners to provide guidance and support for response and recovery activities.

Several communities throughout the province continue to be impacted by high water levels. Reported impacts to date include loss of road access, flooded properties and damage to infrastructure. As a result of these impacts, four municipal emergency operations centres have been activated and states of local emergency have been declared in 26 communities.

The following warnings and high water advisories are in effect:

Provincial Trunk Highway (PTH) 75 is now closed north and south of Morris and detours are in place. Detour information is available at www.manitoba511.ca or by calling 511.

The Red River Floodway and the Portage Diversion continue to operate to lower water levels in Winnipeg. Flow in the floodway channel was near 40,000 cubic feet per second (cfs) this morning. Flows upstream of the floodway inlet this morning are approximately 79,000 cfs.

Manitobans are reminded to stay off waterways including creeks, streams, rivers and the floodway. High flows, debris and cold water temperatures present a significant safety risk. Members of the public are also asked to keep away from flooded areas, water control structures including dams and diversions, and areas where flood response crews are working.

Provincial crews are deployed to a number of communities in southern Manitoba running pumping operations as well as preparing for, monitoring and implementing dike closures as required. Rising waters may necessitate dike or highway closures at some locations and motorists are reminded to stay off closed roads and not attempt to travel across inundated roads. Up-to-date information on highway conditions, including detours and road closures, is available at www.manitoba511.ca or by calling 511.

Flood forecasters will continue to monitor precipitation amounts and assess impacts on flows and levels. The most recent river forecast information can be found at www.gov.mb.ca/mit/floodinfo/index.html.

Flood mitigation assistance can be directed to the municipal authority. In case of an emergency, residents are advised to contact 911.

For more information about flooding in Manitoba, check out www.manitoba.ca/flooding. 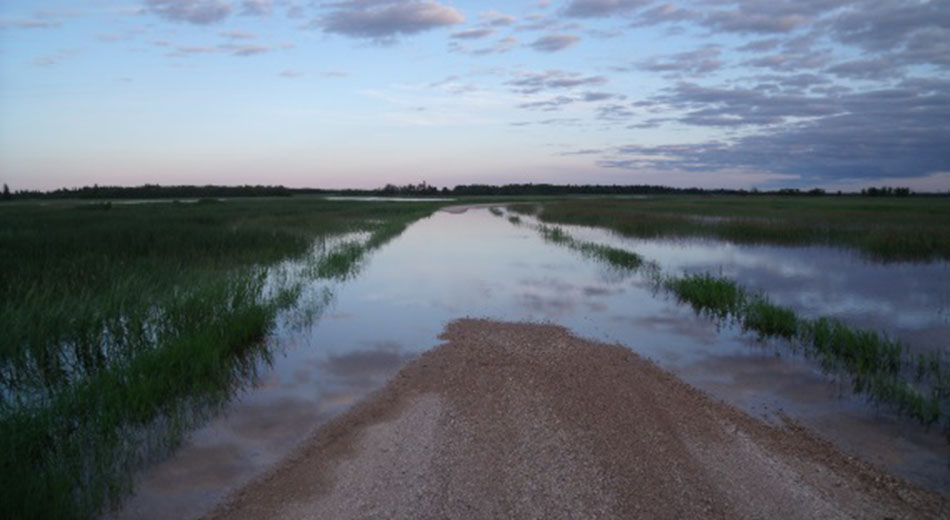