Watch new marina up and ready for use at Delta Beach

The marina at Delta Beach has finally been completed, although they're continuing to work on the project and refine it as time goes by. It was planned and brought into being by the Portage and District Boat Launch Group, a volunteer-based not-for-profit organization, and the public boat launch welcomes anyone.

Rick Henderson is part of the seven-member committee that organized the project and gave PortageOnline a personal tour of the site both on land and on water, and the day could not have been more perfect. The water in the marina was as still as glass and the sky was perfectly blue.

"We're still working on different things like the ramp. As the water goes down, we'll have to put more of this stuff in," says Henderson speaking about the rock material for the new launch.

The marina has a floating dock system, locally made by Tony Woodward of Pop Docks Inc., allowing for two boats to be launched at once. The docks are made with 2-litre pop bottles for floatation and a metal boxing system, quite environmentally friendly.

He notes there's a roundabout for vehicles to conveniently drive in and turn around to point their boats down toward the water on the launch.

Henderson says they'd love to pave the area, but they're paying for everything as money comes in, noting all that's been installed and in place is all paid for.

They designated an area for trucks and cars to park. Beside the roundabout is a nice grassy area with a bench donated in memory of a local resident's loved one for people to sit and enjoy the waterfront. Henderson adds The Pelican is a convenience store beside the marina where people can get ice cream and sit on their marina green enjoying the nice weather. He notes it's not a picnic site, but great for enjoying a small snack.

He says the area was originally quite messy with a marsh, and they put posts in the ground marking out the section so as to prohibit vehicles from driving over the grass, but it does allow for a golf cart.

"We're saving money for next year when, hopefully, we can get the proper buoy systems, but they're expensive, too," notes Henderson. "They're $400.00 apiece. But I come up with an idea this year, and it worked for fastening the buoys in the water using bungee cords. And they've stayed there through the big winds and everything."

Henderson explains that winds can get quite high and several people have required assistance after they drifted while floating on small floatation rafts.

"We've been having our meetings online and everything," says Henderson. "We just had one here a month or so ago. They decided that the marina is going to be called the 'Sheila and Rick Henderson Marina.' A sign will eventually be installed on the grounds. It's just that she came up with the idea. They said there were so many people out here who wanted it named after us."

Henderson notes his wife passed away a few years ago and he's sure she would be thrilled with what they've accomplished.

Robert Hancox, also known as Chouie (pronounced shoo-ey) to the group, is their technical advisor. He explains the marina's simply a big bonus for Delta and it just improves the community.

"I've only been here four years," notes Hancox. "I was here a lot when I was a kid, but then I went away for a while. So, it's nice to see these changes. Everybody is really impressed. They think it's just the greatest thing."

Henderson explains Kyle Hamilton from the RM of Portage la Prairie had a large part to play, for which the group is very appreciative.

"I originated the drawing for the Marina, but Kyle Hamilton came on board and he helped me tremendously for the last three years with the design of the marina," adds Henderson. "He did that because they said we had to configure water levels for a 40-year period -- the highs and the lows. That's where we get the depth to build the marina and then for the ramp to work properly. He was excellent -- hats off to him. He had a big contribution to this, too."

Henderson notes one of the docks closest to the launch site is only for daytime use when launches are made and boats cannot be left at this particular one all night.

Volunteers worked on the entire project and it's a not-for-profit organization, with all funding going back into the marina.  Henderson stresses they don't charge for boat launches but would very much like a donation of some sort during a launch. A donation box is located beside the launch site awaiting a sign to indicate its purpose. He says the nearby store, The Pelican, also takes donations for the marina.

People have signed a three-year lease for the docks to help provide funding to bring the project to a useful state with most going toward the actual docks. Henderson explains the docks will be stored over the winter and reinstated once weather permits next spring.

The docks form a u-shape configuration for the boats.

"We're blessed with high water this year, too," adds Henderson. "The lake is three feet higher than what it was last year when we were having trouble with sandbars. We'll have to address the dredging out there where they get into lower water. It would be nice to keep the water at this level. We've got room now for 22 boats in here. We're going to put 24, but probably next year we'll put another two slips in."

He says they can configure the docks any way that's required due to their mobile nature.

"For docks and everything, you're probably looking at $225,000. That's what we've spent so far," continues Henderson. "We have lots of plans for next year, too. We're going to have to get more grants. People volunteer. We thank all the volunteers. They've helped and there's been a lot of local people that have donated to the marina money-wise and with help."

He shares what it feels like to see it done to this extent.

"Oh, that's a nice relief, actually," notes Henderson. "My wife and I started this project in July of 2018," adds Henderson. "It was after a meeting and she wanted to get everybody interested in her dream to get a marina. But unfortunately, she passed away in November of 2018. I took a little bit of time off from that. For the last three years, I've been working on paperwork to get this going. So, I devoted a lot of time on this, but it's nice that it's here now."

He says they put the shovel in this year in late January.

"We had those Colorado lows coming into spring, so we couldn't really do anything," adds Henderson. "We finally got the docks. We had to make sure all the vegetation was back in here for environmental concerns. It's worked out good that way."

All of the leases are currently taken.

"Every boat has to carry liability insurance in here," notes Henderson. "It's a $2-million liability insurance policy that we have to have, and then people signed the lease and sent it back to us as proof of signature. They know all of the marina rules -- it's a pretty thick book."

He adds everyone loves it and is giving so many positive comments.

Kassandra Chauvin is with Dominion Divers and launched their boat to take soil samples. She shares her thoughts on the value of the new marina.

"I like it a lot," says Chauvin. "It was my fifth time actually backing up a boat, and just the fact that it's so wide, it's actually really nice. It was very easy to get in, so far, so we'll see how easy it is to get out.  As a group, we will be using it often."

The major sponsors who made this possible were the Province of Manitoba, the RM of Portage la Prairie, the Portage Wildlife Club, Trans Canada Pipeline, the Community Foundation of Portage and District, and of course, the public support that's provided many donations of money, material, time and hands-on help. 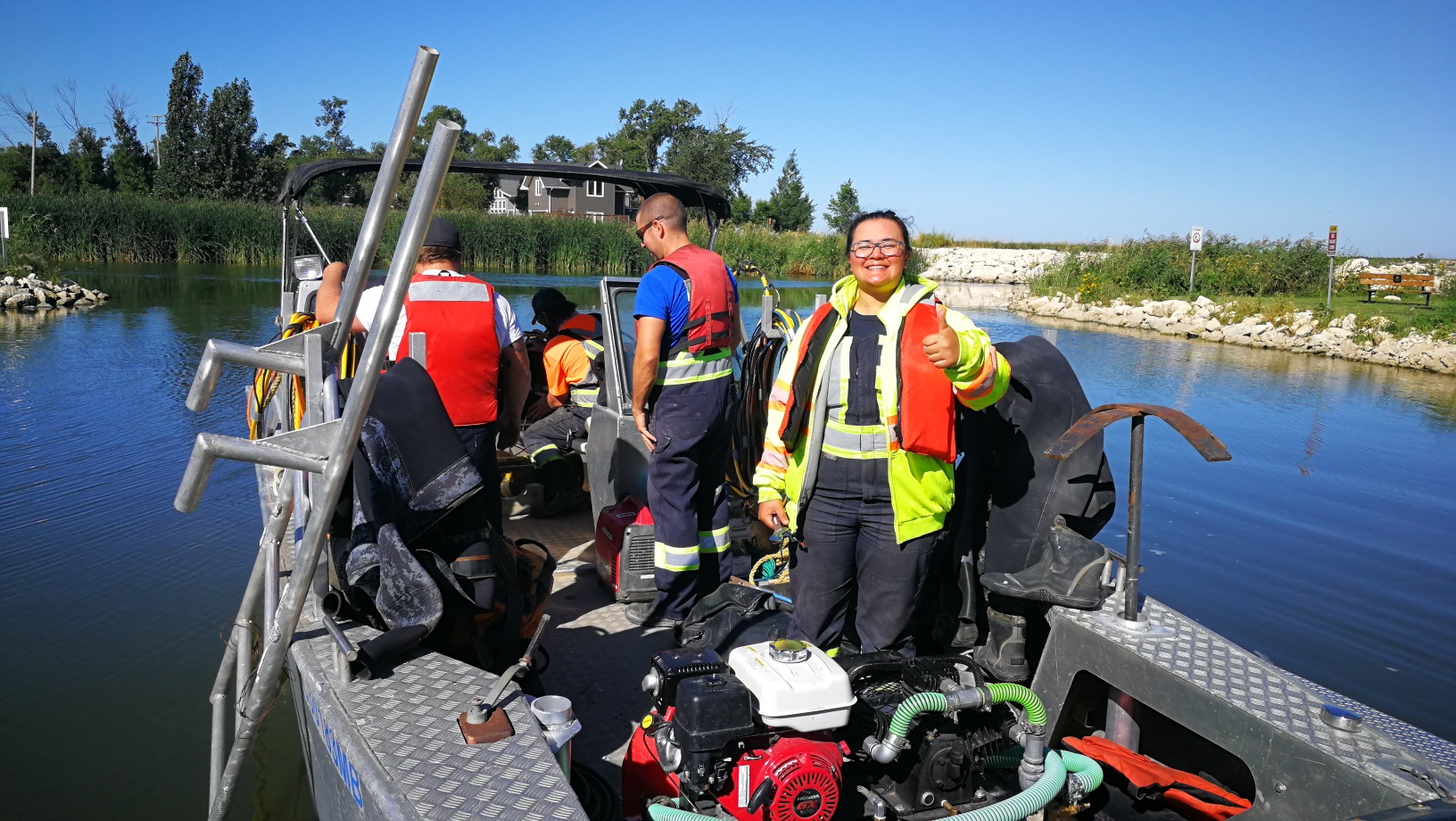 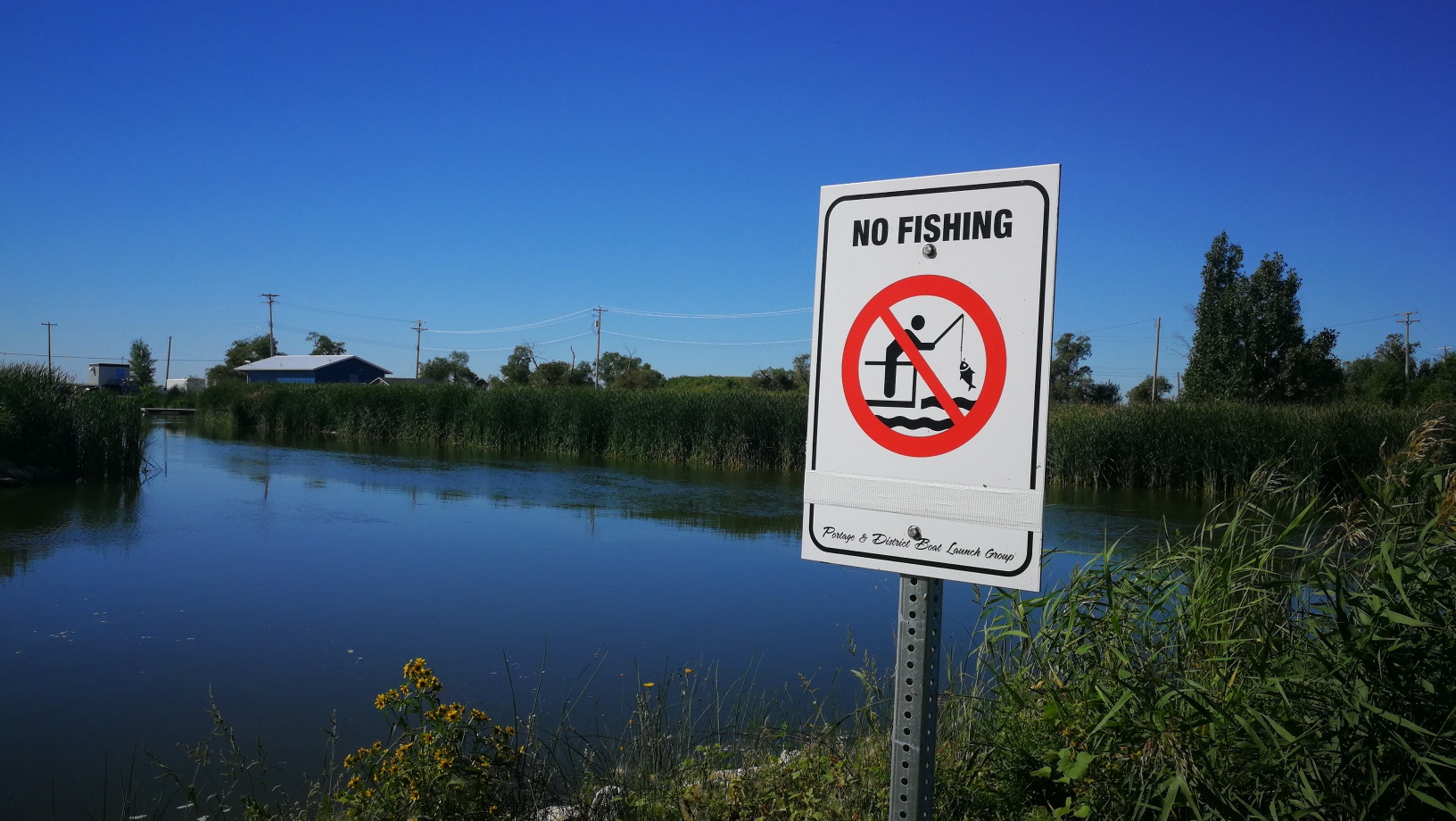 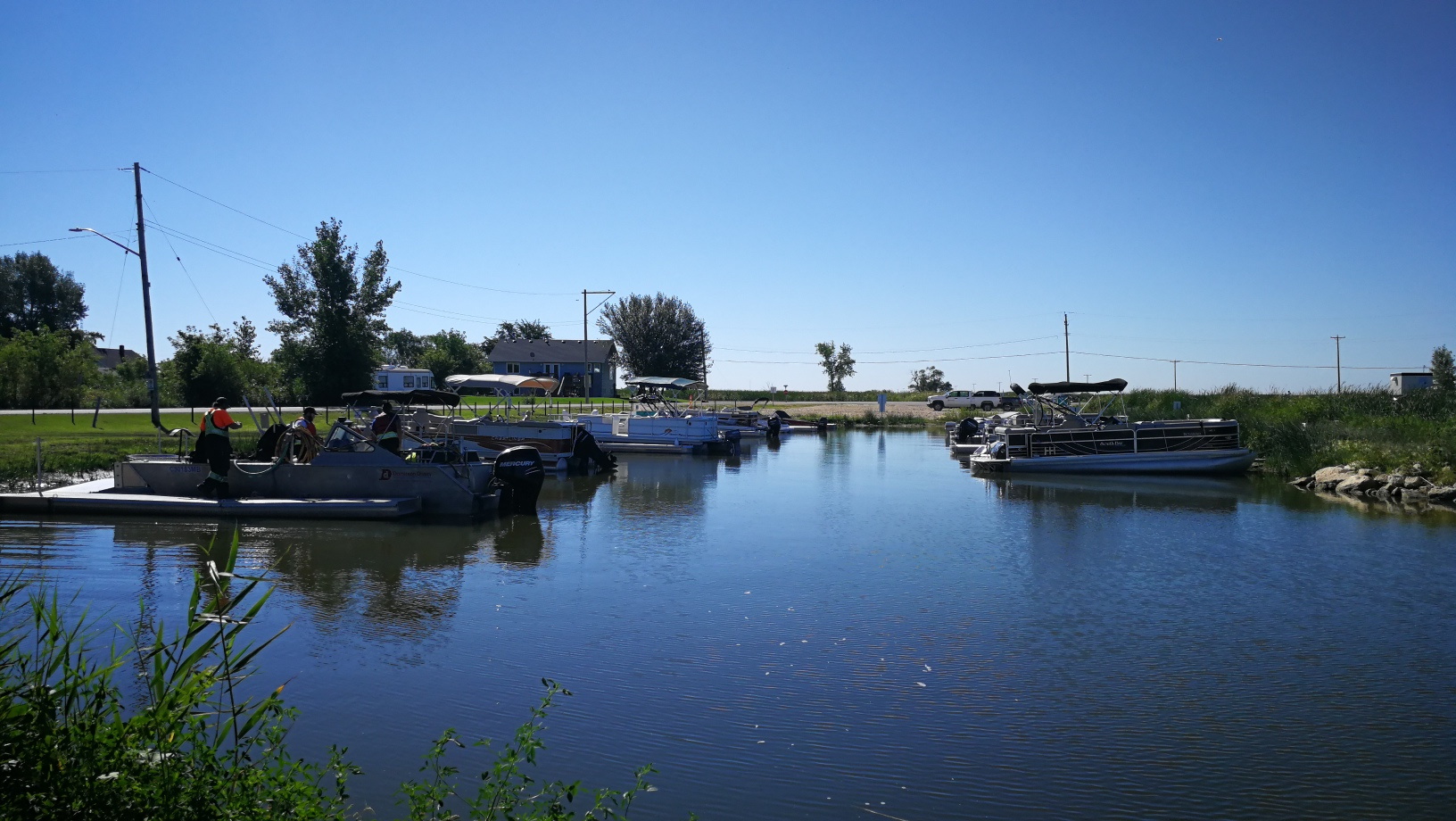 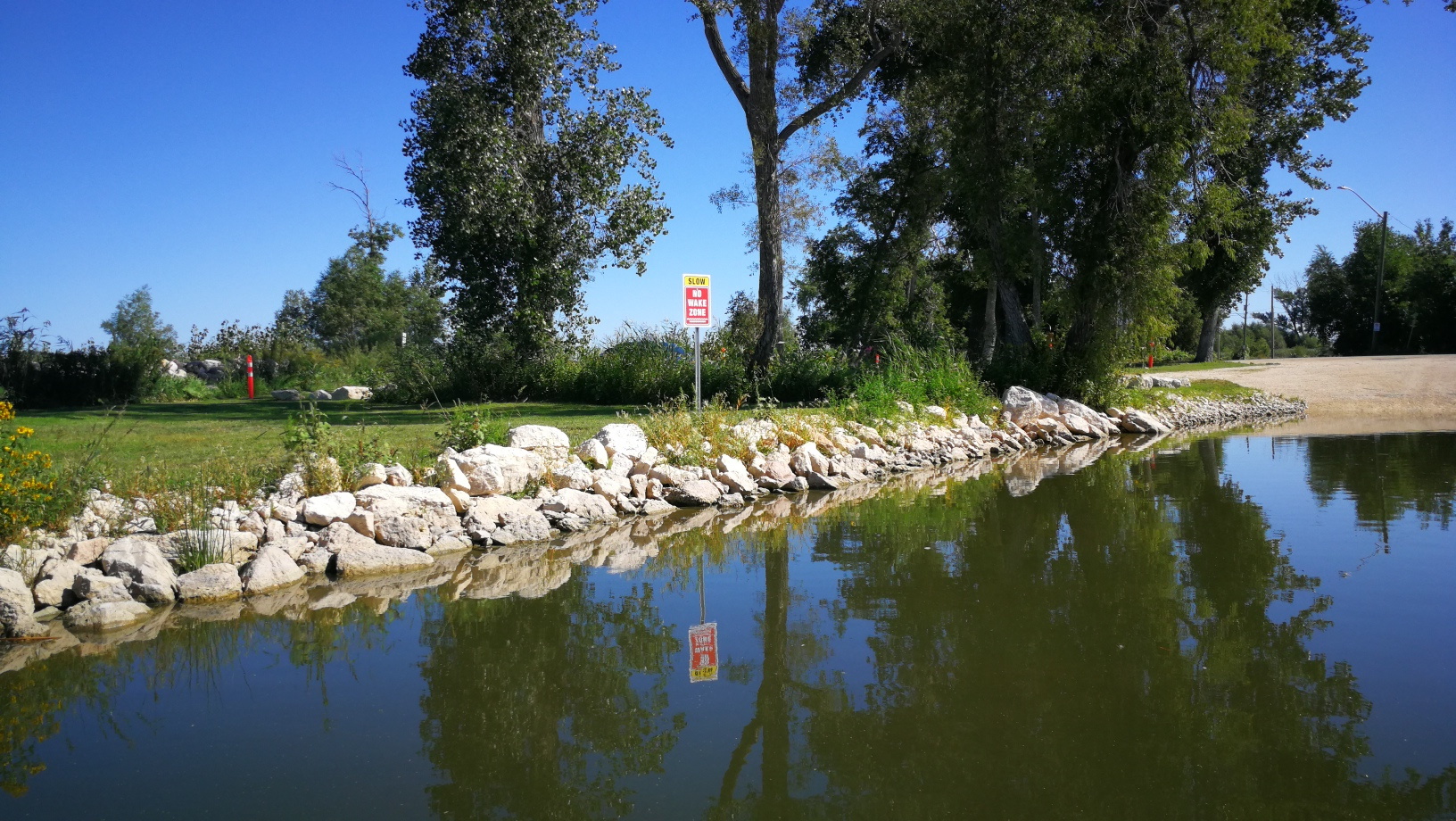 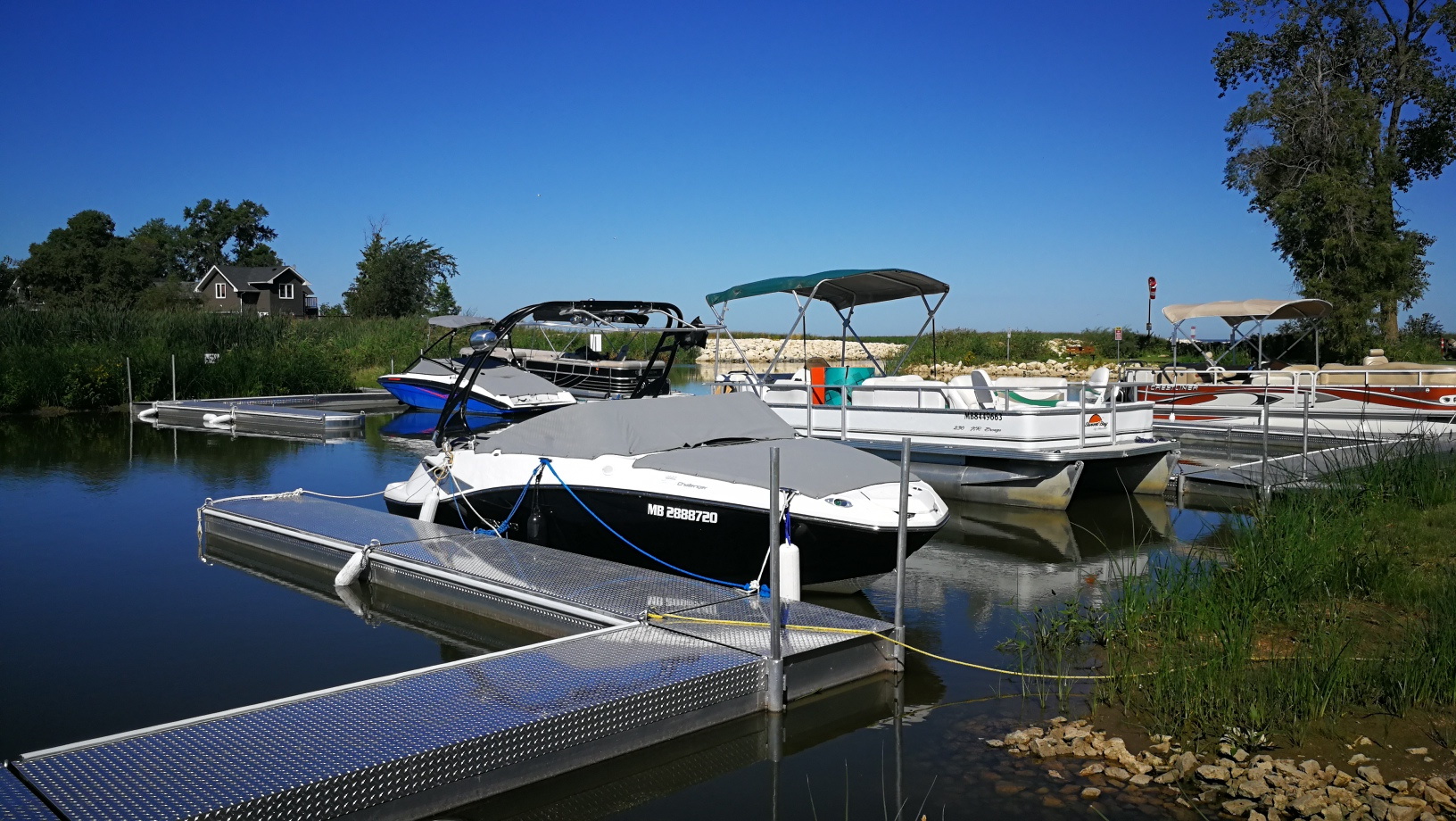 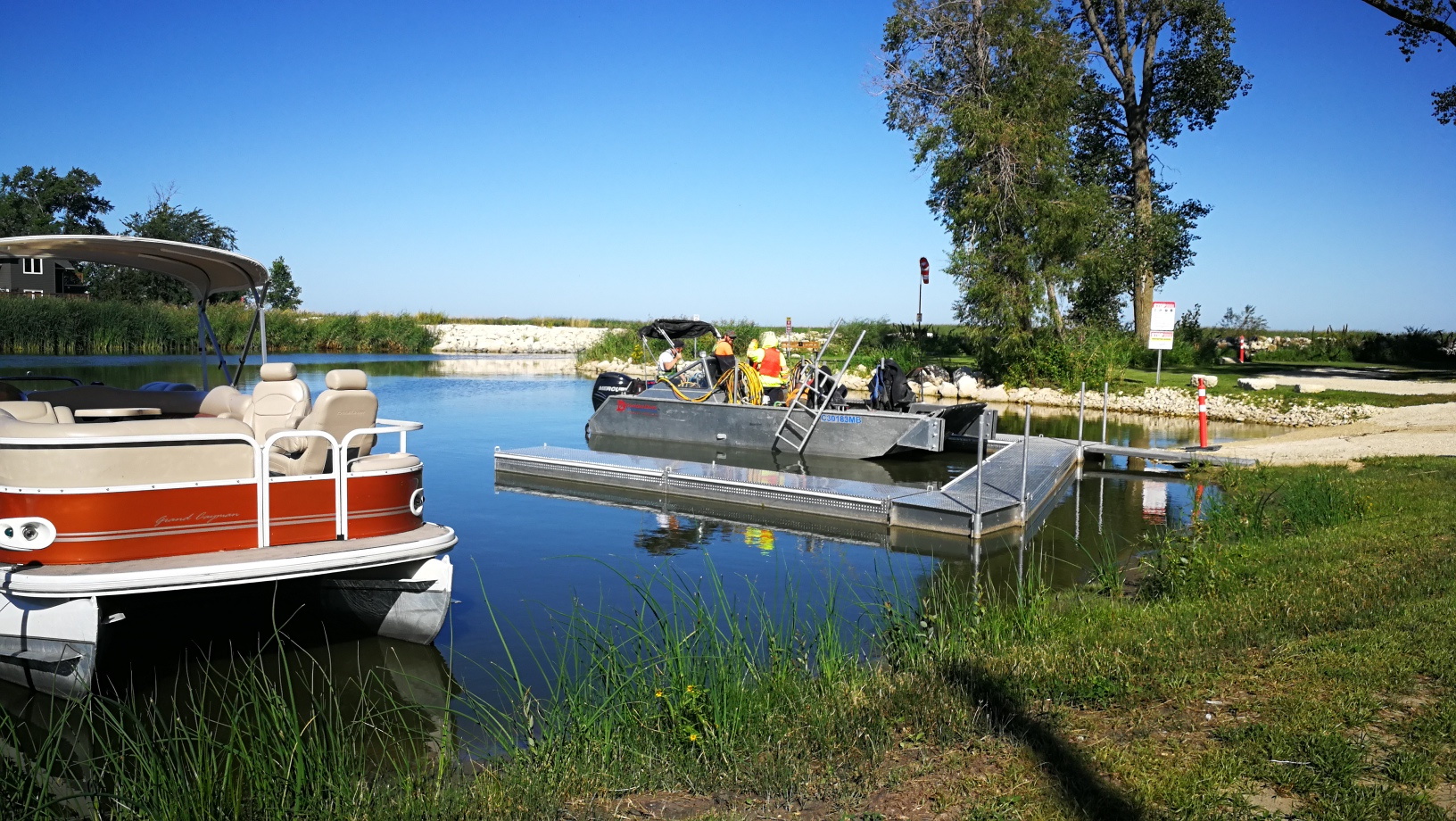 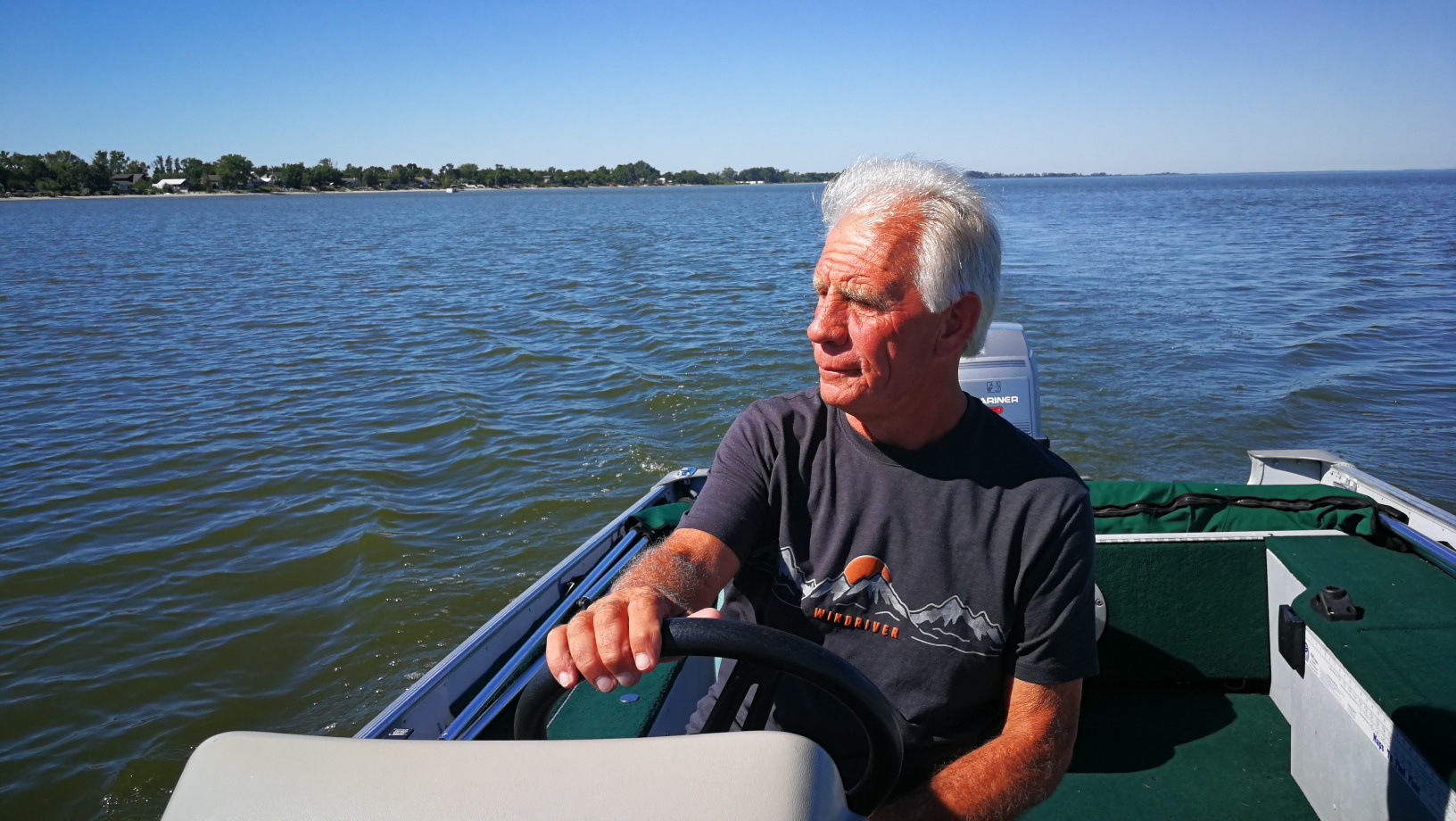