Recent foggy conditions have caused problems in some areas of the region more than others. Portage la Prairie fared through the troublesome conditions last week, but it's something that Manitoba Hydro has to keep an eye on every year.

The Notre Dame, Somerset, Baldur area has recently been plagued with hydro lines weighed down by ice, swinging in the wind. Those lines are now recovering daily, but Manitoba Hydro Media Relations Officer Bruce Owen says you only have to look back a few years when Portage la Prairie lost power for several days.

"It's important to remember that October 2019 was almost a unique weather event in that it happened on the Thanksgiving weekend. We had a tremendous amount of wet snow, not only in Winnipeg but in the large part of south and southwestern Manitoba," says Owen. "We still had a lot of leaves on the trees. That's what caused us the grief -- that combination of thick, wet snow -- a large amount of it. It was not only clinging to leaves, but that weight of that snow on the trees snapped those branches on top of power lines in the open areas."

He notes this made the thick, wet snow clog the roads, as well as cling to power lines and poles.

"This year -- and this is something we go through almost every year, sometimes early in the winter -- it's that mixture and that fog that freezes and turns everything beautiful. There are no leaves on the trees. People are out taking pictures of this lovely frost, but it causes us grief year after year after year," says Owen. "If we left it alone, the danger or the risk is, if we get any wind, especially in those open areas of the Prairies, that thickness of ice or hoar frost on the lines makes them droop."

Owen says this causes the wind to blow lines bringing stress on them.

"That also puts stress on the poles, and that's where you have the poles snapping and breaking, causing widespread outages," continues Owen. "This time, again, it's more normal. We deal with it a couple of times each winter. We always have a standard practice of going out and rolling it. We have people in vehicles and guys climbing up poles, and rolling that ice off the lines where we can. In other areas we do ice-melts. That's through our system control. Picture a hot element on your stove, and it turns red. It's almost like that, but not quite. We heat it up by causing a short circuit in the line, and that heat in the line melts that snow, and it just drops safely to the ground, and we're good to go."

He adds they began doing that last week in Killarney, the Parkland region, Somerset area, and Warren.

"It's all those little areas where there's not a lot of tree cover, but it's wide open areas where we've got power lines," adds Owen. "If you don't do anything, and you just leave it, then the risk is, of course, those lines coming down, and poles coming down."

"In the winter and spring, early in those shoulder seasons, between that deep winter, both the fall and spring, is when we get that fog and that ice," says Owen. "Also, freezing rain doesn't help. If we get that thick, wet snow with temperatures low, and if we get any rain or frozen snow, or freezing rain, it causes a few problems, too. It doesn't look like that's in the forecast."

He explains the short-circuiting of lines has been implemented for a few years now, and it's something that they can do at times without causing their customers any outages.

"At other times we may take a brief outage as we do this, just so we can do it safely and make sure that everything goes according to plan," adds Owen. 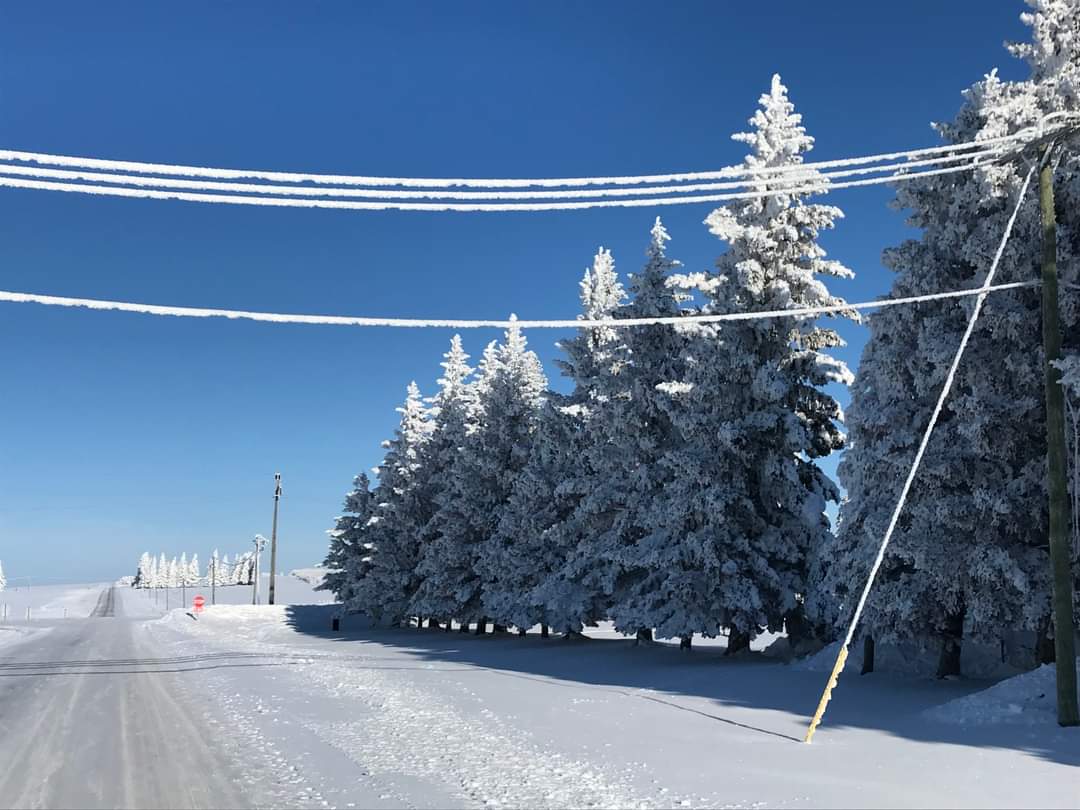